February 5, 2019 – NEW YORK, NY – Hadassah, The Women’s Zionist Organization of America, Inc. (HWZOA) and other Jewish advocacy groups joined Congresswoman Carolyn B. Maloney (NY-12) at the Center for Jewish History to address a national rise in anti-Semitism and to announce the reintroduction of the Never Again Education Act. This proposed bipartisan legislation will create a new grant program at the U.S. Department of Education to give teachers across the United States the resources and training necessary to teach our nation’s children the important lessons of the Holocaust and the horrific consequences of hate and intolerance. Congresswoman Maloney introduced the bill last Thursday with Congresswoman Elise Stefanik (NY-21).

Hadassah, the nation’s largest Zionist women’s organization, is the lead NGO working on the Never Again Education Act and was responsible for sending thousands of letters supporting this bill and securing many of the House supporters of this legislation. Hadassah Executive Director / CEO Janice Weinman spoke at the bill’s official announcement last April in New York City.

Maloney states: “In the past few years, there has been a significant rise in anti-Semitic hate crimes throughout our nation and in New York City. According to the Anti-Defamation League, anti-Semitic incidents in the United States have spiked roughly 60 percent between 2016 and
2017. NYPD figures show over 180 anti-Semitic incidents in 2018, a 22 percent spike from 2017, and a 38.6 percent increase from 2016. We must be vigilant in the fight against hatred and ensure our youth understand the horrors of the Holocaust and the intolerance and bigotry that led to it, so we can fulfill the promise of ‘Never Again.’”

Maloney continues, “We are at a dangerous moment in time. Anti-Semitism is on the rise around the world and here at home, and the memory of the Holocaust is fading for large numbers of our youth. It is simply not enough to condemn hateful, violent attacks to the Jewish community- we must take steps to educate people about the horrors of the Holocaust and the consequences of intolerance. I am proud to reintroduce the Never Again Education Act, so that we can be vigilant in the fight against hatred and give teachers across the United States the resources and training they need to teach our children the important lessons of the Holocaust.”

Congresswoman Elise Stefanik states, “Over the last few years, a concerning number of anti-Semitic incidents have occurred in our country. My hope is that this bill will combat the rise of this inexcusable behavior by further educating our nation’s students on the unthinkable and innumerable atrocities of the Holocaust. As a nation, we cannot allow a return to the hateful actions that led to the Holocaust and I’m proud to do my part to change it.”

Weinman noted at the February 4th press conference that “Given the numerous recent polls which reveal that the Holocaust is fading from memory, especially in younger demographics, we must be vigilant about anti-hate education. We must insist that Americans understand, consider and do something about the growing hate in our country. The Never Again Education Act will provide vital resources to schools nationwide, including funds for teacher training, high-level curricula, meetings with survivors and field trips to museums so that students receive the exposure they need to understand the consequences of hate.

Weinman adds, “Hadassah is proud to serve as the non-governmental organization (NGO) convener of the bill, mobilizing our 300,000 members and supporters as well as other non-profit organizations around the country to garner support for it. Our New York and Washington DC advocacy teams and our members in every congressional district are working closely with the Congresswomen and her staff, and we will continue to take action until we see the passage of this important legislation. Congresswoman Maloney, thank you again for having us here today, for striving to do better for the students of America, and for making this world a better place to live in.”

What the bill does:

Hadassah, the Women’s Zionist Organization of America, Inc. (HWZOA) is the largest Jewish women’s organization in the United States. With 300,000 members, associates and supporters Hadassah brings Jewish women together to effect change and advocate on critical issues such as medical care, research and women's empowerment – meeting with elected officials on Capitol Hill and locally through its Day in the District Program. Through the Hadassah Medical Organization's two hospitals, the world-renowned trauma center and the leading research facility in Jerusalem, Hadassah supports the delivery of exemplary patient care to over a million people every year. HMO serves without regard to race, religion or nationality and earned a Nobel Peace Prize Nomination in 2005 for building “bridges to peace” through equality in medical treatment. For more information, visit my.hadassah.org.

In a year of unprecedented challenges, Hadassah members made their voices heard in Washington and built an immense portfolio of bipartisan legislative victories that help to heal our world. 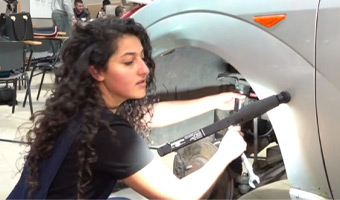